On Saturday, September 29th, 2012, history was made when Jetlev Southwest President Dean O’Malley successfully flew the Jetlev jetpack from Newport Beach to Catalina, establishing a world record for longest distance traveled by jetpack.

Here’s the ABC Nightline segment that was aired on national TV on October 18th:

And here’s the interview with Inside Edition on the beach after arriving in Avalon: 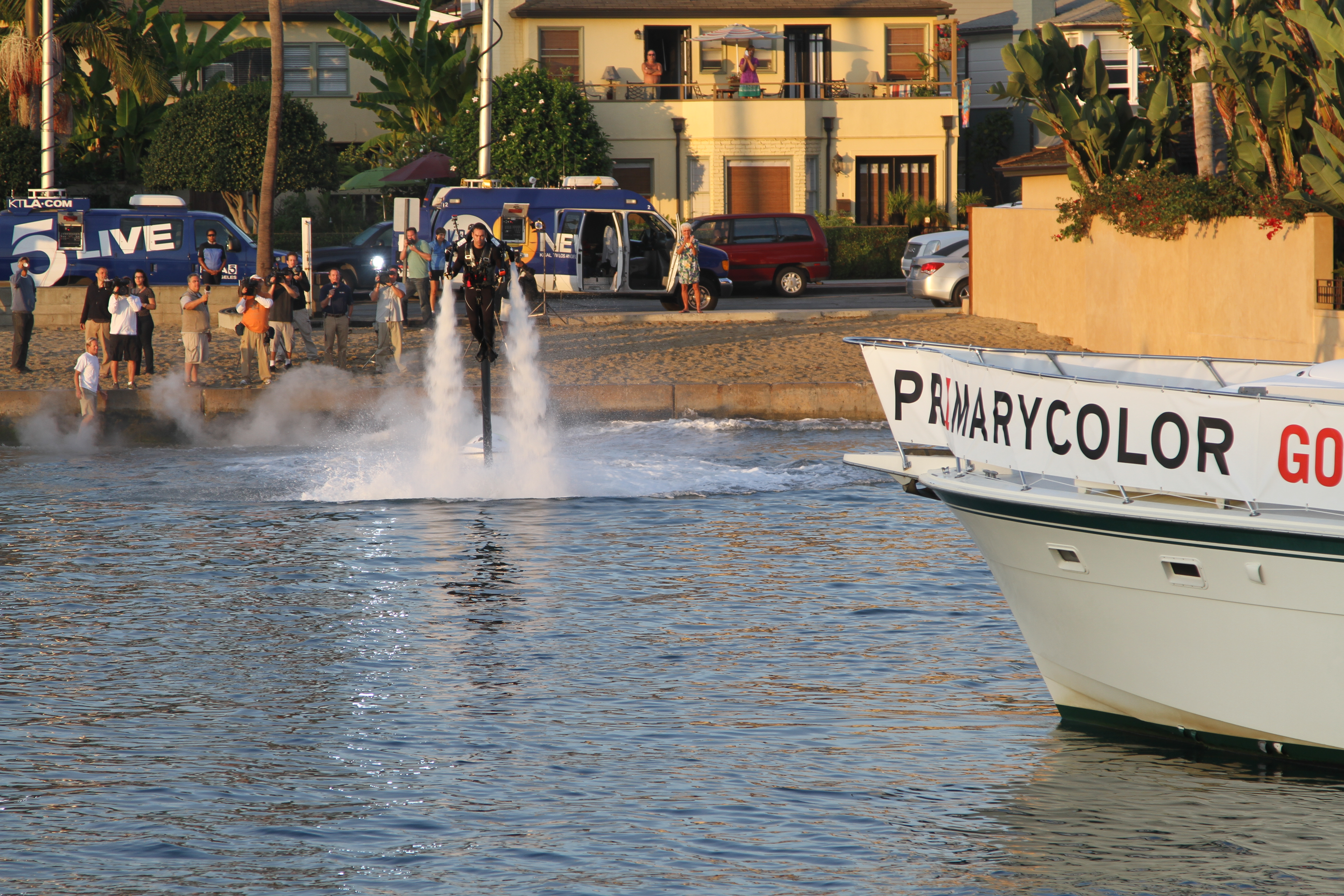 Departing shortly after sunrise, after a brief press conference at the last public beach in the harbor, O’Malley set out into the ocean, with several support boats and about a dozen spectator boats joining to witness the historic attempt.
With sunny skies and warm weather, the flight began with no issue, but very quickly the conditions worsened and swells surged to 3-4 feet, with 15-20 knot cross winds. Top speeds were initially in the 10-15 knot range, but slowed to under 10 knots as the conditions got worse and worse. 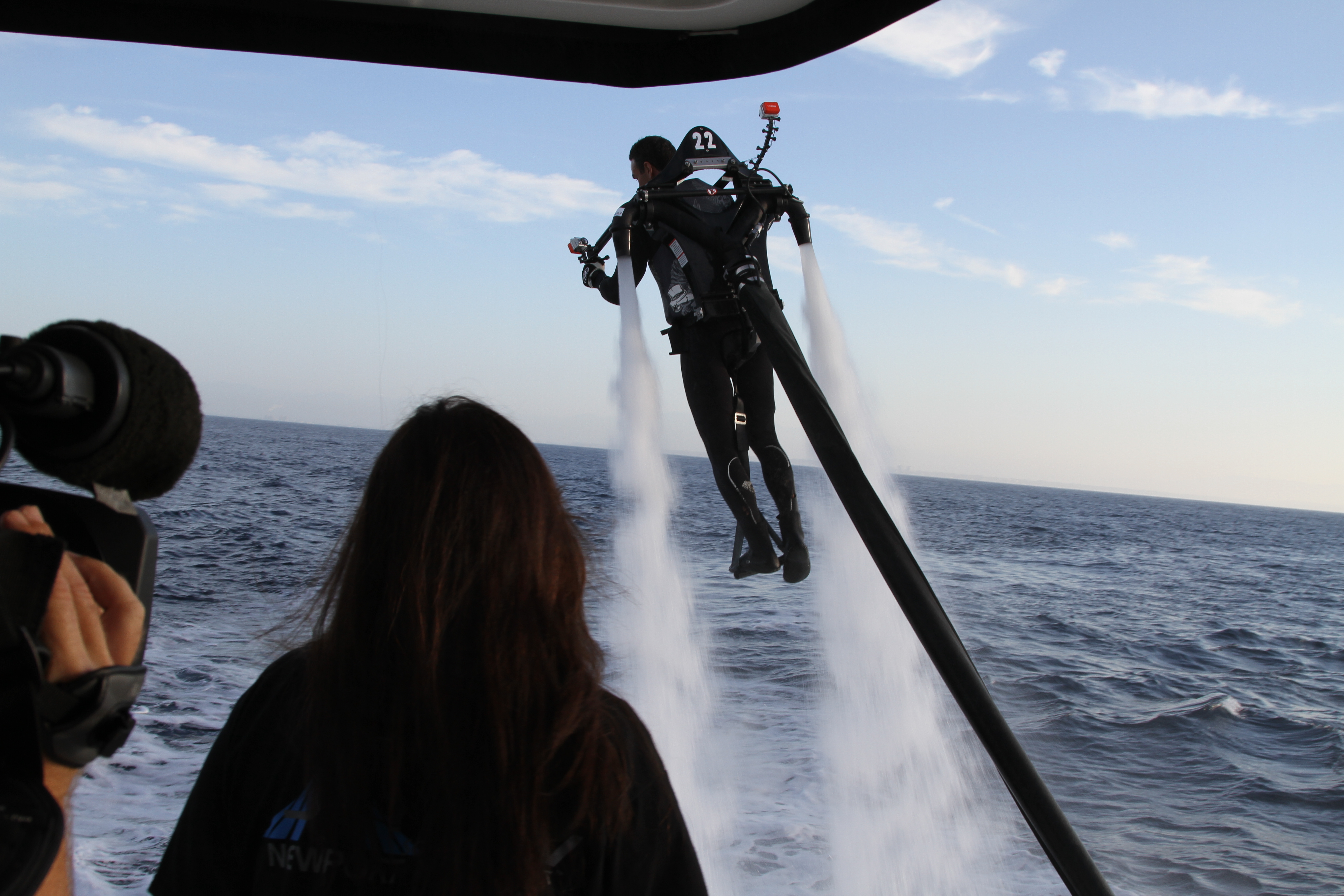 With ABC’s Nightline and Inside Edition on board the support boats to capture the event, O’Malley pressed forward realizing that the hopes of a 2-hour crossing on a single tank of gas were probably not going to come to be.
About two hours into the flight, and 13 miles into the crossing, the Jetlev unit finally ran out of gas and O’Malley dropped into the water. Fortunately, a support dinghy with fuel cans was ready and waiting, so the “pit stop” to refuel was completed in less than 20 minutes, during which time the thought of sharks was in the back of everyone’s minds. 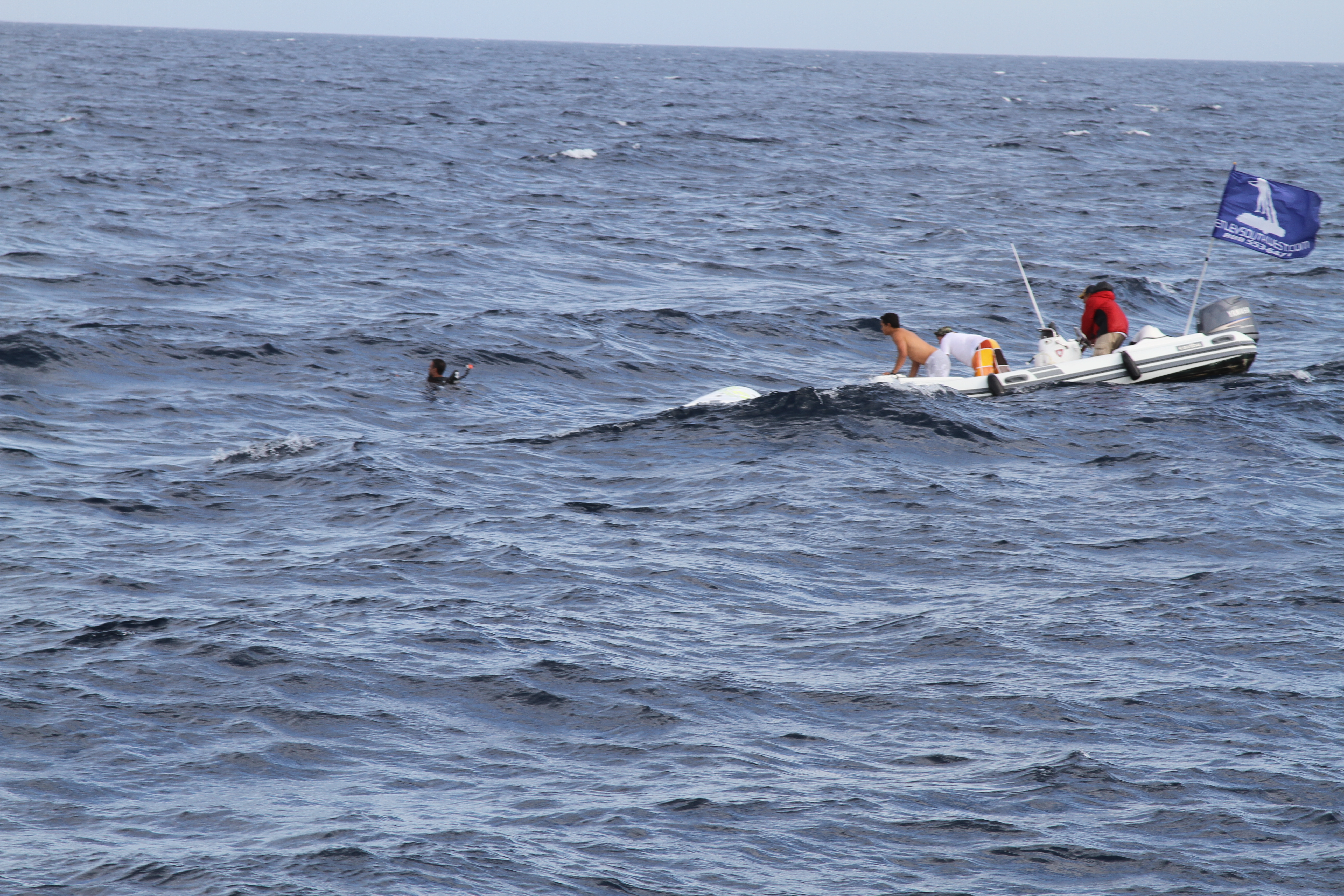 After the refueling, the bad luck started to pile up. The second support boat, Sun Down, wrapped a line around one of their engine props, so they were forced to drop back. One of the support dinghies lost an engine and had to be towed from the halfway point. And the water conditions worsened, with swells forcing O’Malley to slow his speed and constantly adjust the control arms up and down to account for the drag on the boat unit trailing behind him.
Despite the conditions, the group pressed onward. After another hour and a half, the 18 gallons of gas that was added to the tank in the first refueling ran out and O’Malley once again dropped into the water, this time with Catalina Island only about six miles in the distance. Due to the issues with the support boats, the dinghies had split from the group, so the second refueling took over 30 minutes to complete, adding the last ten gallons of gas, which should’ve been more than enough to make the final push into Avalon. 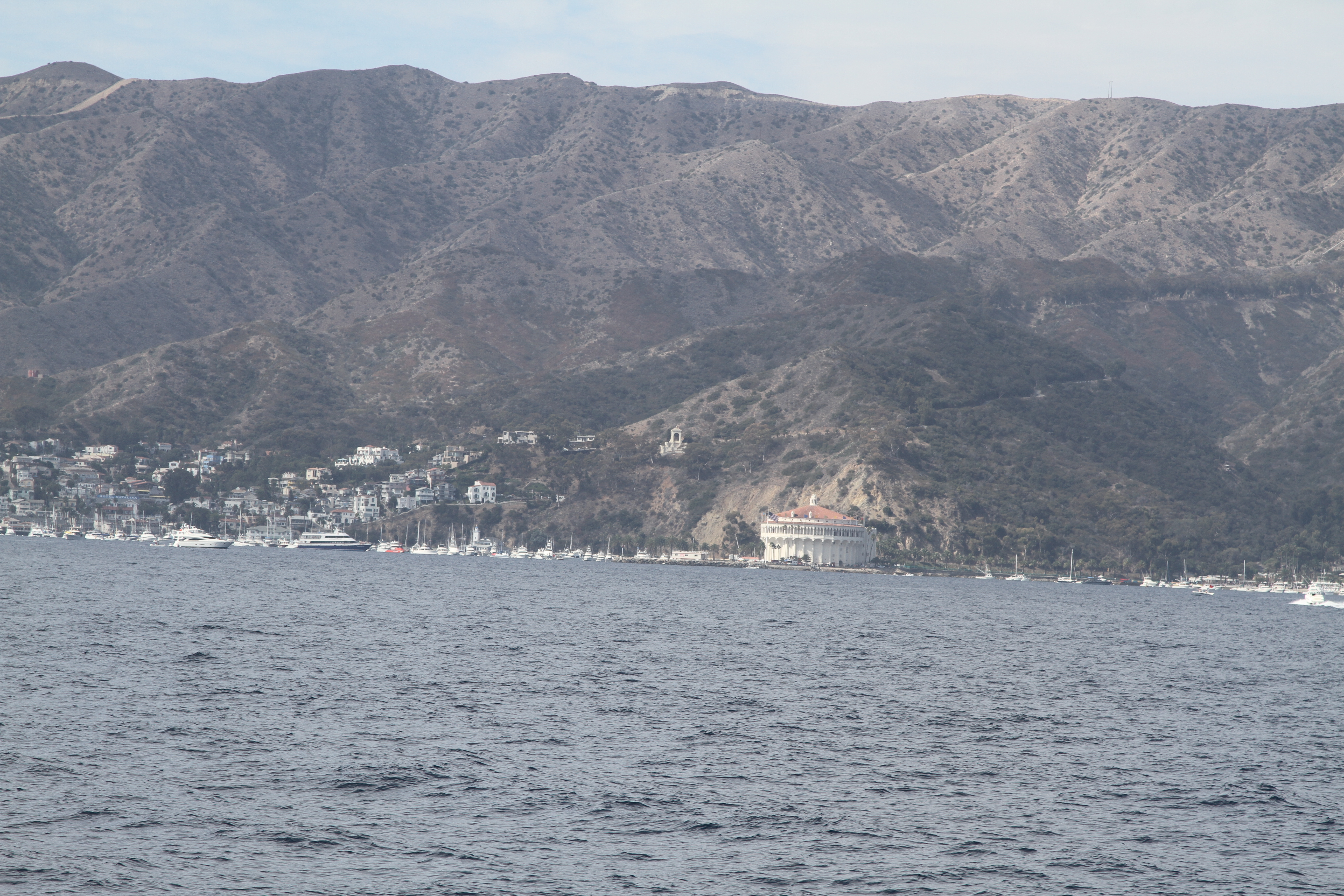 O’Malley once again shot into the air, relieved to (hopefully) have the last refueling stop behind him, with no encounters with curious ocean predators. Even with Avalon looming in the distance, the last section of the crossing seemed to take forever, but eventually the famous casino was on the horizon and the group knew the trip would ultimately be a success. 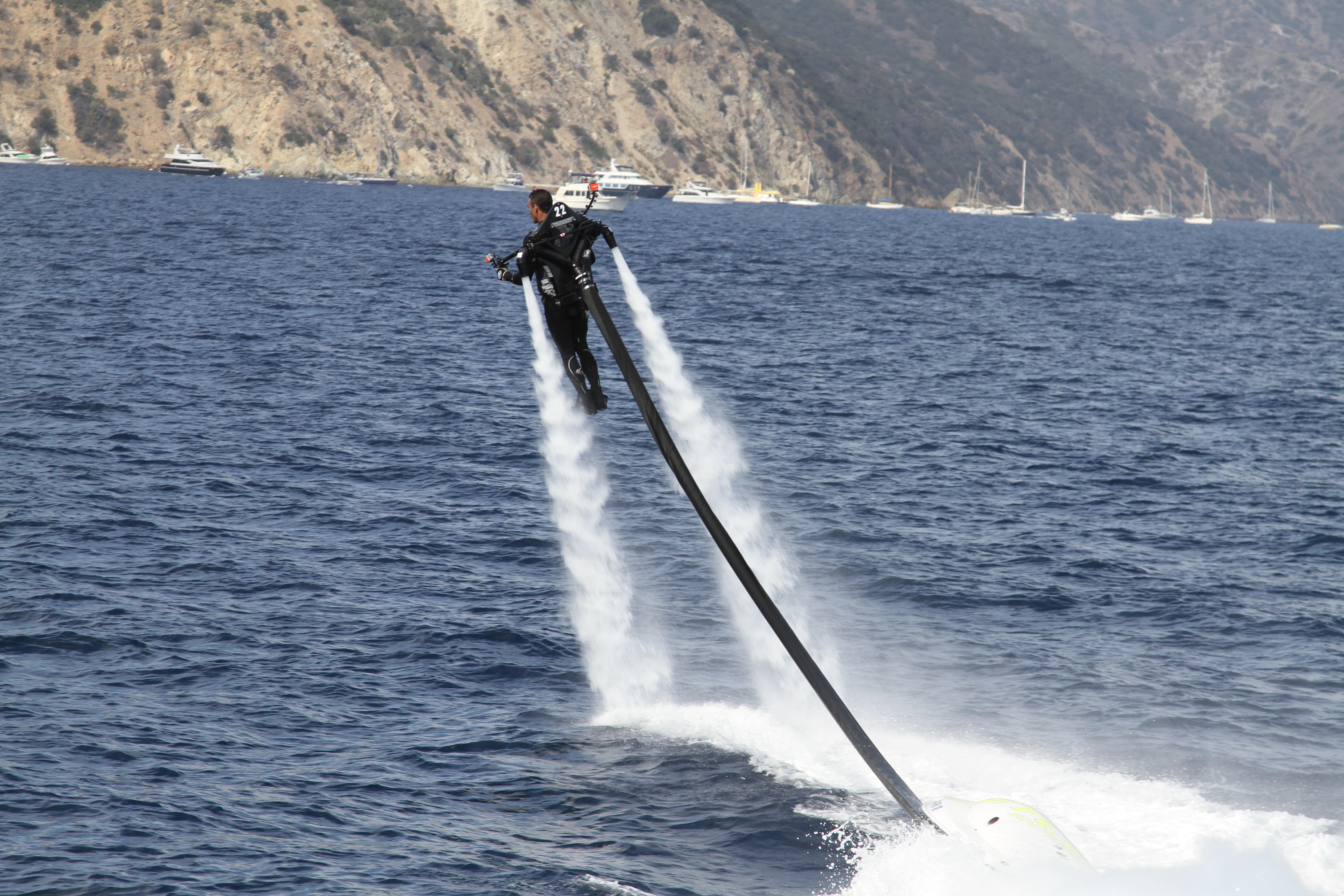 After over four hours, O’Malley made his final approach into Avalon as the Catalina Flyer was entering the harbor in the distance. In order to allow the media on the boats to disembark and gather on the beach for the formal arrival, O’Malley had to fly around the harbor, which led to a collection of dinghies gathering to watch the impromptu demo.
With the Catalina Air Show in full swing, there were stunt planes doing maneuvers in the sky as O’Malley flew donut turns and high hovers around the harbor.
Finally, word was given that the press had gathered and it was time to come in for the official landing. After the last six miles to get to Catalina and the flying around the harbor, as O’Malley approached the beach, he ran out of gas a third time, literally just feet from the sand. Fortunately, he came down in waist deep water and was able to walk in the last few feet, but it was not quite the grand entrance he’d been hoping to make. 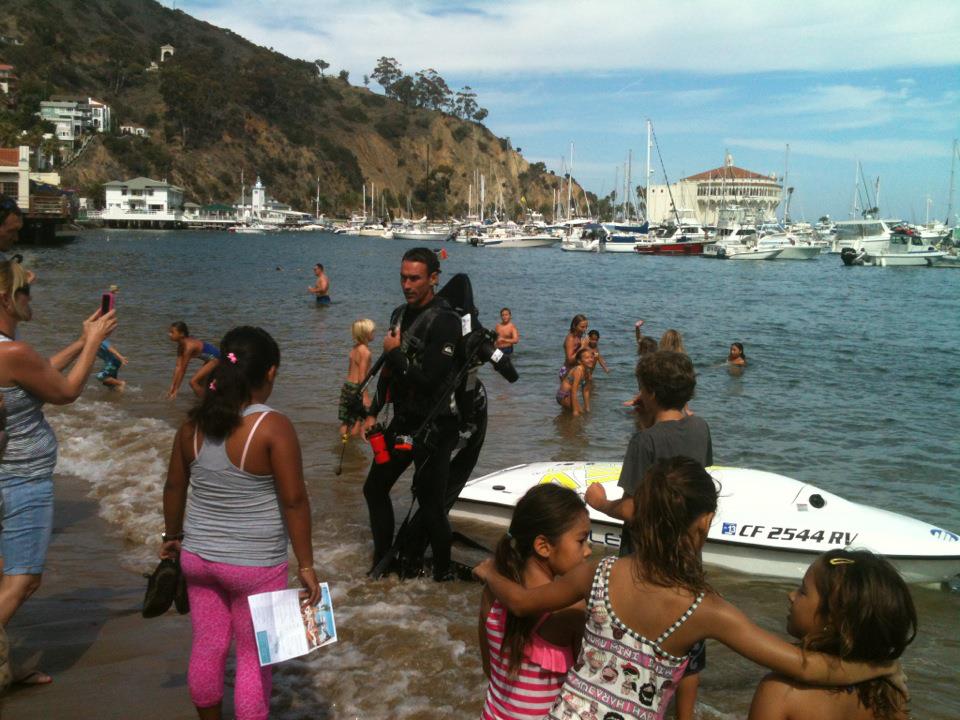 Nonetheless, the crowd cheered the world record flight and the exhausted pilot answered questions from the crowd and gave interviews to Nightline, Inside Edition and the local Catalina radio station.
When it was all said and done, the flight, along with the refueling stops and hovering in Avalon Harbor, had taken over four hours and 50 gallons of gas, three support boats had been taken out of commission, due to a variety of issues, and several passengers on the support boats were hit with violent bouts of seasickness, but the official jetpack distance record had been set and it had been definitively proven that the crossing was possible.
Now it’s up to the next adventurous individual to make the crossing faster or go even farther…
To see more coverage on the historic event, click the links below:
Channel 5 News Coverage
Inside Edition Report
KFWB News Radio Interview
NPR Interview
Los Angeles Times Article
CBS News Coverage
UK’s Daily Mail Article
Share