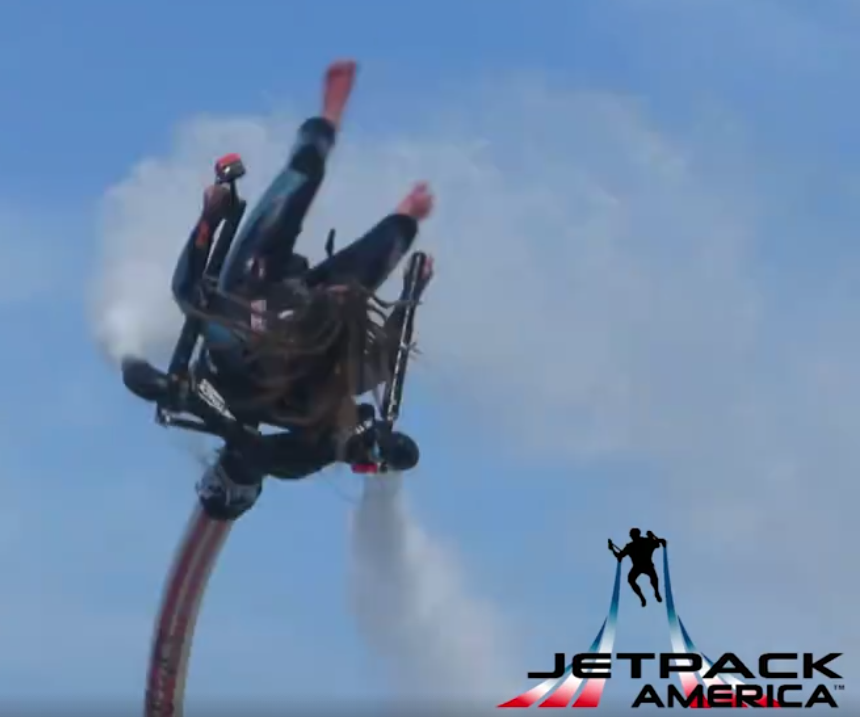 
San Diego has birthed what may be the newest (and coolest) trick in hydroflight: the Double Downward Cork. You’ll have to see it to believe it! Water
powered jetpacks have been dropping jaws since their arrival on the action sports scene only years ago. With their ever growing popularity, hydroflight
pilots are becoming increasingly agile and skilled in inventing and pulling off new tricks. Hydroflight athletes everywhere are pushing the envelope
for the next big trick. They’re exploring depths underwater, spinning dizzy in the clouds, and imitating roller coasters… what’s next?


The Double Downward Corkscrew is a gut-wrenching, 50 foot drop; a spiraling plummet towards the water below.

To prepare for the advanced Hydroflight maneuver, the pilot goes into a full 50 foot hover above the water, carefully positioned over the hose. Once hovering
inplace, the control arms are slightly lifted, angling the pilot backwards; the pilot then quickly yanks one control arm all the way down, sending
themselves into a sideways plummet. Rounding the first rotation, the opposite arm is then wrenched upward, facing the propulsion in two different directions.
With the jets opposing one another, the speed of the rotation and angle of pilot perpetuates the dropping spiral into a disorienting, inverted side-flip
that looks (and must feel) impossible to recover.  But it isn’t.

Reaching the halfway point of the last rotation, both of the control arms are reversed in position; this begins slowing the final half of the flip
and ultimately stopping the pilot inches from the surfac oof the water, If all goes well. If all does NOT go well, the end result could mean Hydroflight
splashdown or one or many painful outcomes. If the pilot pulls out too late, they’ll strike the water at 15mph and likely be feeling the error of their
ways.

The pilot’s main goal is keepin from becoming disoriented mid-spin. That leaves them unaware of their position and puts them at risk of hitting the
jet ski or surrounding obstacles. In the last phase of the maneuver, the control arms are  “over-corrected” to right the position of the Jetpack.
However, without perfect timing, this could throw the pilot off balance, resulting in a most unsavory demise.

With the freedom to invent new tricks comes the ability to stake a claim as the “first” to do something. In the end, that means dropping a new marker
for others who come along later to try and one-up your claim to hydroflight fame!