Just before Heisman Trophy winning Florida State quarterback Jameis Winston was drafted by the NFL’s Tampa Bay Buccaneers last year, he decided to take
a quick break from football and learn how to jetpack.  Jameis was in San Diego working with George Whitfield Jr., a world renowned quarterback
coach. With a multi-million dollar NFL contract on the line, Jameis had to be certain he was in safe hands. Jetpack America instructor Jessie Orlando
got the call to help get Winston airborne and do it safely.
With 300-pound defensive lineman routinely chasing him around a football field it wasn’t much of a surprise to Orlando that Winston took to hydroflight
without much trouble. “Jameis was cool, calm, and collected – exactly the mind-state that you need to fly Jetpacks”, Orlando said. When asked why he
chose to go jetpacking, Winston explained that it was “just something that he always wanted to try”. 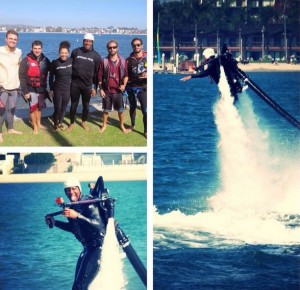 Jetpack America instructor Orlando is a huge football fan so he was
“absolutely thrilled to instruct such a talented athlete”. “He did incredibly well” Orlando said. The video footage Jetpack America shot of his flight
shows Jameis was a natural.

Jon Statman, lead instructor at Jetpack America-San Diego said Winston had a favorite trick he quickly mastered. “Jameis loved the underwater submarine
trick – he couldn’t get enough of them”. Jameis told Statman and Orlando that he wanted to bring his NFL teammates back out to San Diego for a
team-building exercise using the jetpack experience. Before Jameis left, he took pictures with the Jetpack America staff to show off to his teammates
back in Tampa Bay. The story of Jameis Winston’s jetpack day in San Diego was quickly picked up by a variety of national sports media outlets including CBS Sports.

Winston was named to the NFL’s Bowl Pro team just this week. He might want to
take the opportunity to practice his new found jetpacking skills in Hawaii while he’s there. Not
too far from where the game is being played in Honolulu, there is a hydroflight flight center Jetpack America helped
launch!