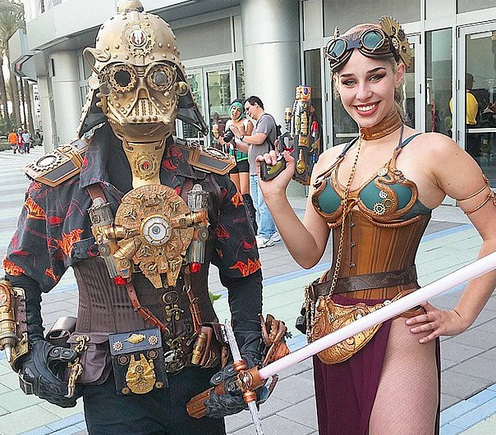 This past weekend Jetpack America had the opportunity to team up with the wonderful people at STEAM and participate in The STEAM Maker Festival. STEAM
is an acronym meaning science, technology, engineering, art and mathematics. We were lucky enough to be involved with some of the best hands-on educators
in San Diego. Dude Vader and the Star Wars Steampunk Universe, MakerPlace, schools and field trippers throughout the county came to this amazing event
to both learn and be educated on the different sciences offered in their very own backyard.

You may be asking yourself, “What does Jetpack America have to do with science?” Simple, hydro jetpack is an example of Newton’s Three Law Laws of Motion in action. This water-based technology demonstrates gravity, inertia, acceleration, just to name a few. More importantly, Jetpack America has given
people from all walks of life the thrill of doing what they never thought possible, from walking on water to diving in and out of the water like a
dolphin.

You say gravity, we say let’s find a way to defy it! That’s just what Jetpack America has done. Our motto isn’t “Stop dreaming, Start flying” for no reason.

Let me put the science of hydro jetpack in perspective for you. There was a moment when I saw a kid’s actual dream become a reality. He came up to Jesse
and asked, “have you ever heard of the one with the feet?” Before he could even finish his sentence Jesse pointed to our Jetblade jetboard
and the kid’s mouth dropped to the floor in astonishment. It was reality, not just a dream. He looked at Jesse and said, “It’s like you read my mind
or something!”

STEAM is not only a festival, it’s a visual and hands-on exploration of what the world has to offer. They are giving children the ok to be themselves and
figure out what it is that interests them in a healthy, safe and very fun environment. The STEAM Maker Festival has year-round activities and classes
for both students and teachers. Whether it be exploring the laws of physics, figuring out how to get your robot to walk or inventing a new gadget,
this program has it all!

When you’re ready to defy gravity and fly with the birds, book the flight package that’s right for you!