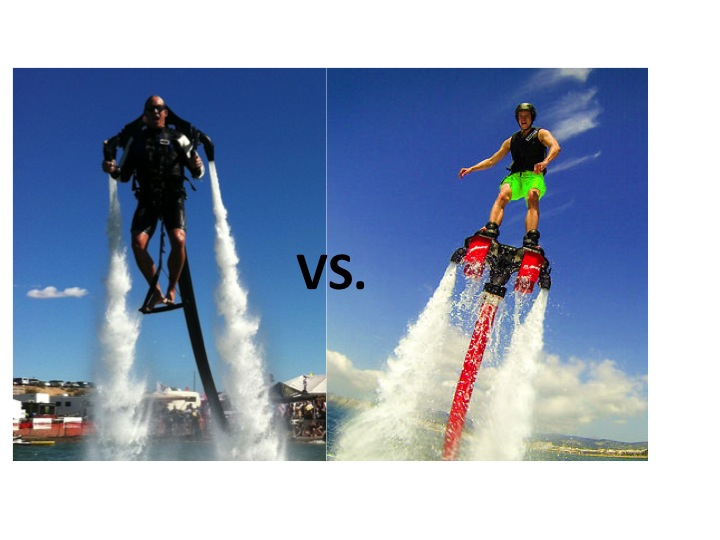 Since
many people have asked us about how the Jetlev jet pack compares to the new Zapata Flyboard, we felt that it was necessary to put our response in writing
on the website, so there was no ambiguity about the situation.

JETLEV JETPACK HISTORY
Jetlev Technologies, Inc. has been working on the Jetlev water-powered jetpack concept since 2000. The inventor, Ray Li, has spent thousands of hours and
millions of dollars developing, prototyping, testing and manufacturing his Jetlev jet pack.
It literally took years before the concept of a water-propelled vessel was even at a point where manned-flights could be entertained. Once the prototypes
were tested, models were revised, technologies were developed and improved, and visions became realities, the Jetlev jet pack was finally ready for
public launch.
People have balked at the Jetlev jet pack price tag, but when you take into account the amount of time and resources that have been invested in getting
it to this point (and you realize it’s a jet pack), the price makes a lot more sense.
INTRODUCTION OF THE ZAPATA FLYBOARD
In Fall of 2011, a new YouTube video began to circulate from a company selling a very similar product called the FlyBoard, which features a pump mechanism,
nozzles to direct water flow, throttle to control thrust, and many inner workings that come directly from the Jetlev jet pack concept.
SIMILARITIES AND DIFFERENCES
The primary difference between the two products is that one is a jet pack worn on the back and the other is a board under the feet. The Jetlev also has
a self-contained boat unit, which allows the pilot to throttle himself, while the Flyboard must be attached to a personal watercraft (PWC) and requires
a second person on the PWC to control the throttle. Other than this, the technology is essentially identical, which it why it has led to cases of patent
infringement in several countries around the world. The price that Zapata is offering is substantially lower than the Jetlev jet pack, but this is
because the amount spent on research and development has been negligible.
Most people find the jet pack to be easier to learn, with the jets above the center of gravity rather than below, but both devices can be learned fairly
quickly. Those with board sports experience tend to pick up the Flyboard faster than those without this experience.
When it comes to water-powered personal flight, demand the original and accept no imitations. The Jetlev R200 Jet Pack is the only patent-protected, safe,
fun, easy-to-use water powered jetpack that you’ll ever want or need!
2015 UPDATE
The Hydroflight industry, as water jet packs, jet boards and jet bikes are now known to be part of, has evolved dramatically since the early days when it was just Jetlev and Flyboard. The market has opened up, the innovation has driven the whole sport forward and the cost to fly and/or own your own equipment has dropped dramatically. Jetpack America is proud to still be at the forefront of the industry, now offering hydroflight equipment from the top manufacturers in the industry: X-Jets, Zapata and Jetovator (Note: Jetlev failed to evolve with the industry and closed its doors in 2014).
For more information on flight lessons, please visit our Jetpack Flight Experience page.
For more information about equipment sales, please visit our Jetpack Sales page.