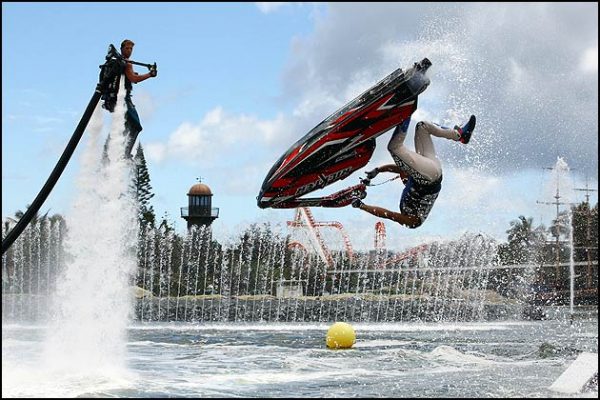 FIRST it was water skis, then jet skis – now Sea World has spent $140,000 to add a state-of-the-art jet pack to its new water show.

The Main Beach theme park has two pilots trained to fly the machine and are looking to add another jet pack for the show in the coming months.

The jet pack lasts up to three hours in the air, has a 200-horsepower marine engine, pushes almost 200kg of thrust through two nozzles and has enough power to empty an average backyard swimming pool in less than five minutes.

“It’s a big investment for Sea World, but definitely worth it when you see the look on these kids’ faces,” Mr Cooke said.

“We’re definitely hoping for another one soon.”

Mr Cooke, the show’s senior team leader, has been riding jet-skis for Sea World’s iconic shows for the past two years and wanted to bring another element of excitement to the production.

“We wanted to do something else but we were not sure what,” he said. 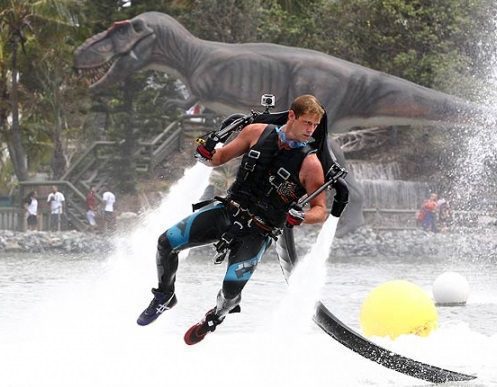 “We did a lot of research, I flew to America to make sure it was safe and suitable for this environment and then did a three-week instructor course.”

Mr Cooke said it felt as if he was walking on water with the pack and hoped it took off as the new craze on the Coast.

“You are strapped in and flying, give it power and it launches up to 30ft,” he said.

“I hope it’s the next craze.

“I would love that experience for everyone to be able to fly.”

Mr Cooke said although it looked scary, there were few chances for the experience to go wrong.

“It’s a bit tricky to fly but if the instructor’s with you, it’s very simple,” he said.

“In training I practised 10 to 15 falls from 30ft into water; it’s just like jumping into a pool from a bit higher. 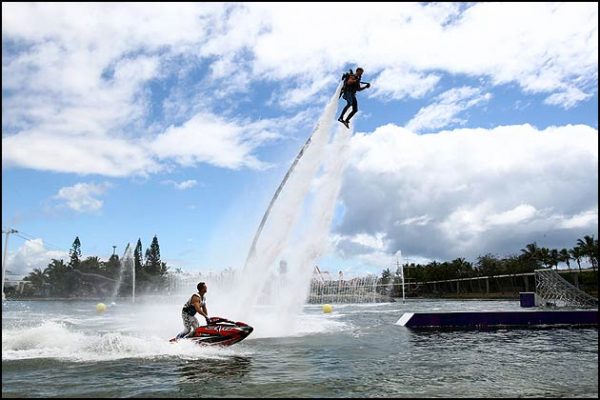 “But when you are strapped to it, there is no real impact on the body.”

A Sea World spokeswoman said the park was always looking for new and exciting ways to lure guests.

“We are always looking for new technologies to provide exciting and innovative attractions,” she said.

“In fact there is something very exciting coming to the park later this year — it will be like nothing ever seen at Sea World before.”

The new show is performed daily at the park.