Skip to content
See below for the Wall Street Journal story, written by journalist Dan Neil, on Jetlev from Friday, December 14th (full story can be found here):

IN THE WEEK or so since I flew the Jetlev R200 hydraulically powered jetpack, people have asked me, “Is it fun?” And I say, Why, yes, it is a jetpack.

This mind-bending piece of equipment, amphibious and aerobatic, slightly ludicrous and respectably hazardous, is a startling encounter with wetter-than-air flight that can be yours for a mere 100 grand (including the lessons that you’ll sorely need). Or you can wait for a chance encounter with a Jetlev rental operation, on the beach in Barbados, say.

My advice: Don’t drink and Jetlev. 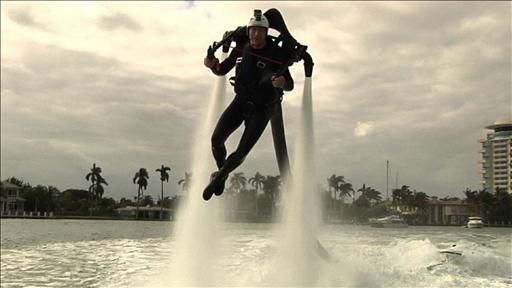 Here’s how it works: Aboard what is essentially a Jet-Ski hull, a three-cylinder, 200-horsepower Rotax engine runs a pump that shoots pressurized water (up to 60 pounds per square inch, or 420 pounds of thrust) up a 4-inch-wide, 33-foot length of high-tech fire hose. Here it meets the jetpack’s aluminum Y connection, routing hydraulic pressure to two laterally mounted thrusters that can be operated separately—forward and back—with lever arms extending over the operator’s shoulders. 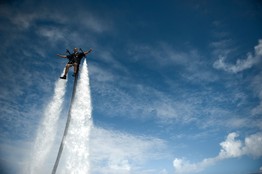 A motorcycle-style twist-grip throttle regulates thrust. The flier sits on a small seat and is strapped in with a race-car-style five-point harness. As the jetpack flies, the pump boat simply trails behind it. The company puts the top speed at 30 miles per hour in level flight, with a range of about 80 miles, or three to five hours of operation.

Such parameters—and the fact that the pilot can both lift off and land from a dock, without ever getting his or her feet wet—raise the possibility of the Jetlev as a commuting device. Please close your eyes with me and enjoy the vision of squadrons of hedge-fund managers jetting down the Hudson River from Tarrytown. 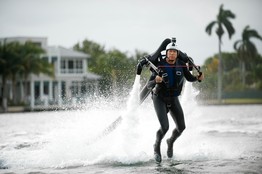 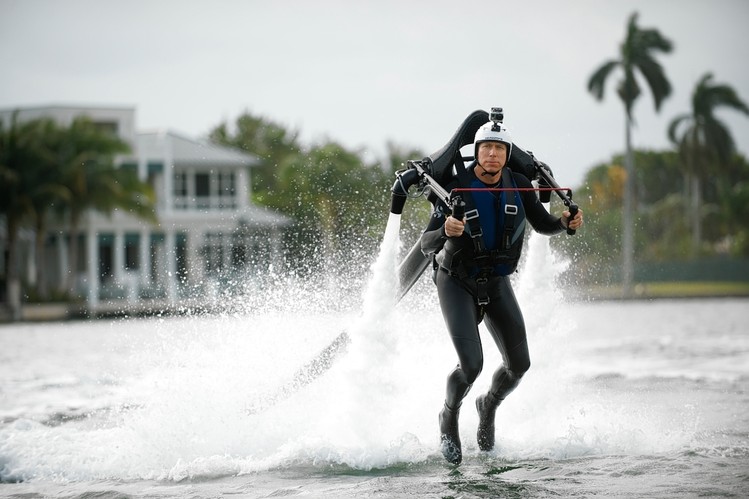 Dan Neil takes his turn in the jetpack.

Among the things to be scrupulously avoided: accelerating upward so fast that you actually pull the boat out of the water, which starves the pump of water and abruptly clips your water wings. The Jetlev has a maximum altitude of 30 feet (about the length of the hose), which is, believe me, a goodly fall.

There are currently about 100 of these machines in the world, made by Jetlev at a palm-shaded industrial park in Dania Beach, Fla., near Fort Lauderdale. Jetlev’s sales office is a pretty little storefront near a marina, with a Maxim calendar model as a receptionist and a salty-as-hell retired ship captain as sales manager. All in all, pretty standard-issue Florida. Sightseeing note: On the marina channel is Lucy and Desi’s old house, a gleaming temple of ’50s modernism. You could raze Fort Lauderdale, for all I care, but save that house.

In the hands of an experienced pilot, the Jetlev is a fantastically nimble machine, capable of high-energy snap rolls, inverted flight, Immelmanns, tail slides, the works. You can skim across the water pedaling your feet as if you were sprinting across the Sea of Galilee. “We are just beginning to explore its maneuverability,” says master pilot Larry Katz, while his protégé Richard Santiago kites away madly in the background. “There is definitely a sport in here somewhere.”

Inexperienced pilots must approach the Jetlev more cautiously, lest they spin out of control like a soggy teabag tied to a bottle rocket. In fact, with first-time fliers, procedures call for Jetlev personnel to operate the throttle remotely, to ease the piloting workload.

“She’s a bit skittish, this thing. I felt that if I sneezed, I’d wind up in Cuba.”

She’s a bit skittish, this thing. Due to the design of control mechanism—the long control arms are connected directly to the thruster bearings in a way that multiplies the operator’s slightest hand movement—it takes a few minutes’ practice just to achieve stable flight. I felt that if I sneezed, I’d wind up in Cuba. 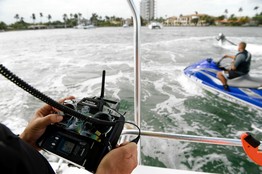 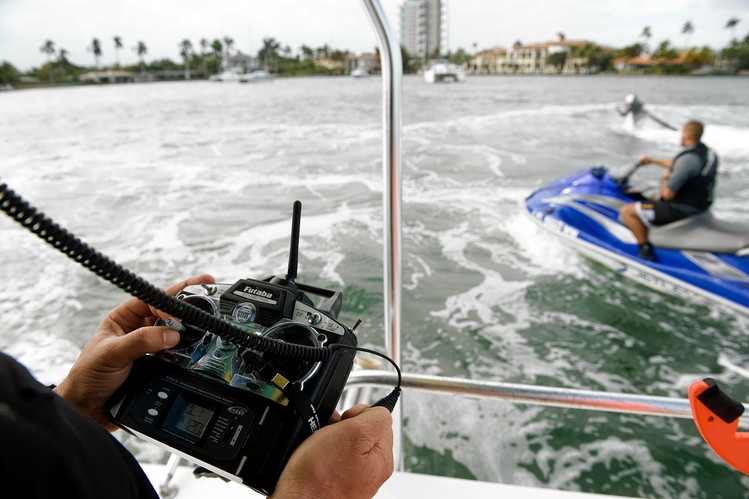 Still, within a few minutes, being coached by Katz over a radio headset built into my helmet, I was flying more or less directionally at will, enough that I could enjoy the Jetlev’s signature move: Because the hydraulic thrust works both above the water and below, you can actually fly the machine underwater, to a depth of 30 feet (again, the length of the hose) or as long as you can hold your breath. Then, aiming upward, you can shoot out of the water like a nuclear attack sub. Fly, Big D, fly!

Jetpacks have become something of a pop-culture meme in the past decade, a hipster shorthand for science fiction’s unfulfilled promises. The title of Daniel H. Wilson’s 2007 book “Where’s My Jetpack?” could just as well include ray guns, flying cars and tricorders. Buck Rogers, Commando Cody, the Rocketeer, Boba Fett, that guy on “Lost in Space.” They all had jetpacks.

Company founder Raymond Li—a reclusive Chinese-Canadian who is, by trade, an accountant—developed his first water-powered jetpack nine years ago, having been inspired as a child by the jetpack scene in the Bond film “Thunderball.” That would have been the real-life Bell Rocket Belt, a shrieking, peroxide-poweredHimmelstürmer that burned like a blowtorch for about 30 seconds before falling unceremoniously out of the sky. (Filmgoers note: For the jetpack scene, Sean Connery dons a crash helmet, marking the only time 007 ever looked like Michael Dukakis.)

In the years since the Bell Rocket Belt, many have pursued the goal of a practical, wearable flying device, and not a few have set their pants on fire. There are actually brave souls around the world who build and fly their own jetpacks, most notably Yves Rossy, a Swiss pilot who created a flying wing powered by four small turbofan engines.

(Full disclosure: I approached M. Rossy’s PR firm about test-flying the Rossy wing. They seemed to think it was a bad idea.)

However, a real, honest-to-God, fly-to-the-market jetpack remains the province of science fiction. Simply put, you cannot get enough propellant on board to attain useful flight duration. Not to mention, a real jetpack sounds like the mouth of Hell when it’s switched on. One of the most surprising qualities of the Jetlev is its relative quiet, a tranquil plashing no louder than, say, the fountains at the Bellagio. The low-profile hull unit is so completely shrouded you can barely hear the engine.

Before leaving the Bell Rocket Belt, it’s worth noting that Mr. Li’s essential innovation—powering a jetpack by way of a pressurized umbilicus—is exactly how Bell engineer Wendell Moore tested his first prototype in the late 1950s, except Mr. Moore used nitrogen gas instead of water.

In 2011, Mr. Li sold out to some Florida-based silent partners, and he now splits his time between Florida and Canada, continuing to develop the Jetlev design while pursuing intellectual-property litigation (there are, in fact, at least two other hydraulically powered flying-machine designs in the world). Company President Benjamin White is—no other way to say it—one silent partner’s brother-in-law brought in from New York to run the company.

The Jetlev design is still in its early days, says Mr. Katz, and a friendlier, more forgiving control mechanism is certainly on the drawing boards for Jetlev 2.0. Meanwhile, the company is developing a military version (more horsepower, longer hose?) that might be useful in piracy interdiction. Proof that real life gets more like “Halo” all the time.

And me? I’m a kingfisher, a dragonfly, a leaping porpoise, the forbidden love child of Aquaman and Superman soaring on pillars of foam. Merry Christmas, my fishy minions, and away!