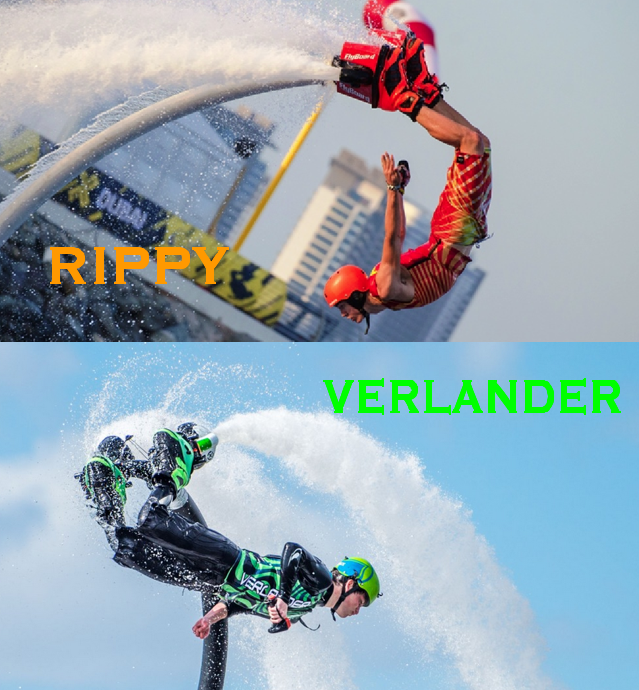 In the world of hydroflight there are two Texas teenagers that have a special drive and desire to take the sport of ‘jetboarding’ to the next level of
public awareness and acceptance.

Their names are Damone Rippy and Hunter Verlander.

You have probably never heard of either of them if you’re a member of the general public. In the next few years that is probably going to change and change
fast. It has already started to happen. These two teenagers from Texas are pushing the limits of a new sport still in its infancy. They’re also doing
it in ways that are bound to get your attention. Strangely enough, both of these hydroflight athletes have already been pushing each others limits
directly for years. The part that will surprise you is they are only 18 and 17-years old respectively. Rippy is the slightly older of the two. 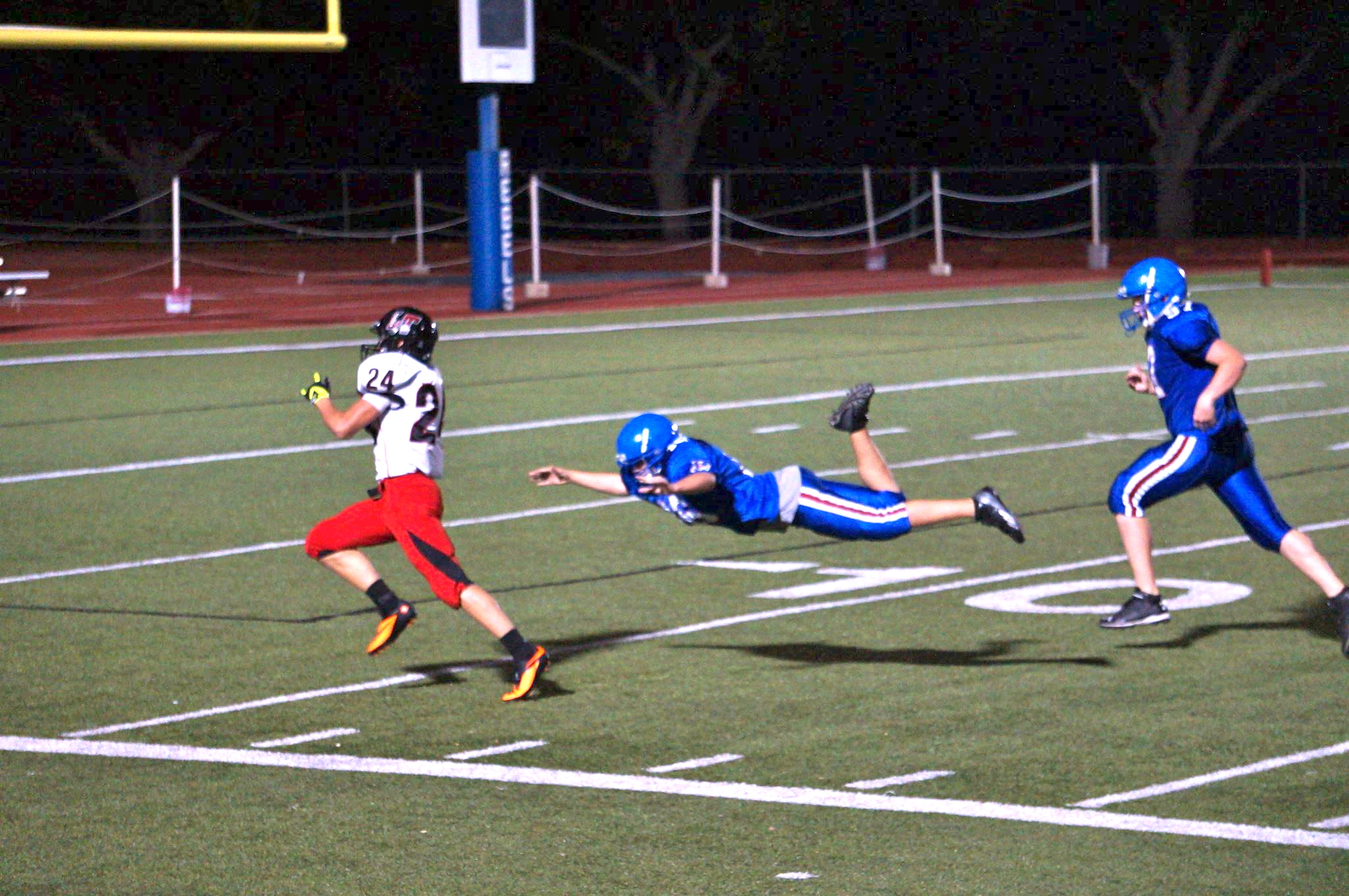 When Damone was a little kid his mom Jaleen says he was always around water or finding a way to do something in it. The Rippy family lives in a rural area
just outside Austin, Texas where there are plenty of lakes to cool off during the hot Texas summers. That is exactly what Damone loved to do according
to his mom. Rippy was a typical Texas kid, like many others, he was drawn to the sport that Texas is known for around the world — Football. As Damone
grew up he played it, loved it and lived it, just like most Texas kids. He was a wide-receiver for most of his young football career. For those of
who don’t know football, the fastest guys on the team are usually wide-receivers. Their job is simple, out run their opponent, catch the ball and get
to the end-zone as fast as possible!

Only a few hours away from where Damone Rippy grew up another Texas hydro-kid was growing up as well. His name is Hunter Verlander. Although neither of
these Texas kids knew of each other at the time, that would soon change when the world of hydroflight exploded onto the internet and world scene in
2012.  It would later bring Damone and Hunter together on a lake just outside Austin Texas for the first time in 2014. Hunter wasn’t all that
different than Damone. They were both typical Texas kids. There was one big difference with Hunter though. He was not a big fan of football. In a state
where football is elevated to a near religious status, that made him just a bit different and unique for his surroundings.


Verlander like Rippy, was always in the water or outside playing as a young child says Michelle his mom. Hunter’s sport of choice was soccer and then
as he got older he took a strong liking to lacrosse. Lacrosse has a lot in common with football. It is a rough and tumble sport, not for the feint
of heart. Hunter’s mom says her son’s love of the water ended up giving him a bit of a unique problem for a kid who loves the water and spends much
of his free time in it. When Hunter was only 9 years old he developed serious ear problems due to a bacteria that was in the water he had been swimming
in one day. Ear infections and ear health have been an issue ever since. 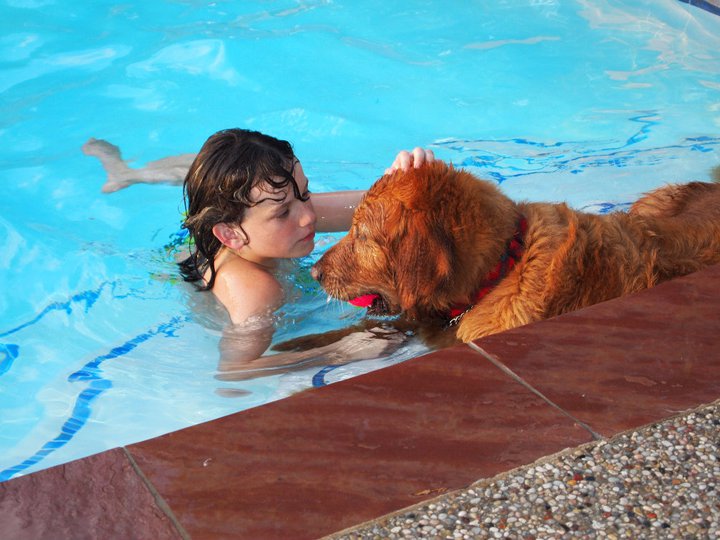 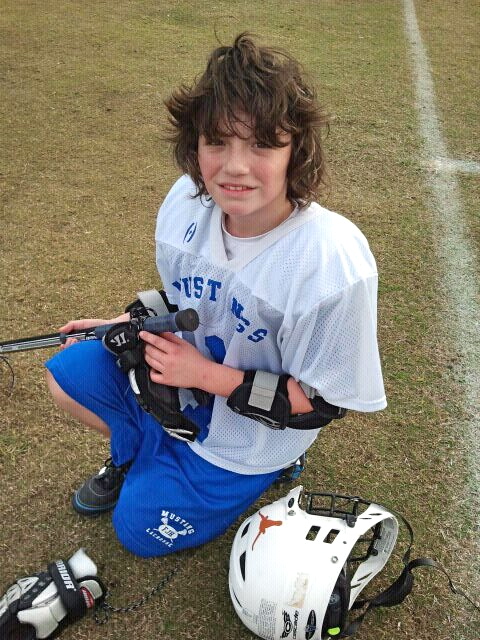 One thing both of these seemingly unconnected and typical Texas teens had in common was they both would take up a new sport called ‘Flyboarding’ at
a very early age. For Damone it was he first saw a video on the internet.  He remembers seeing it when he was invited over to a birthday party
of a local friend of his named Jake Orel. His friend Orel had already tried it and even owned one of them. Orel had jumped into the sport shortly after
it was invented in 2012 and is an expert jetboard rider himself.


What Damone saw was a video of a guy named Franky Zapata in France riding his water jetboard he dubbed a Flyboard. It made him fly like a super-hero.
According to Rippy, it didn’t take him more than a few seconds to decide that this was something he wanted to try in a hurry. Jaleen says her son only
had two questions. How much did one cost? and how soon could he get one!

Verlander on the other hand at the time was still swimming and playing lacrosse and had not seen or heard about this new sport. That was until his
51 year aunt named Tanya showed him a video of the same thing Rippy had seen much earlier. His aunt had already even tired it herself. Hunter’s mom
Michelle had even strapped on a pair of waterjet boots and tried it herself. As Hunter’s mom points out, the Verlander family was known for being a
bit adventurous! Aunt Tanya and his mom Michelle both encouraged Hunter to try it. In the spring of 2104 Hunter says he finally did and started to
learn the sport at a local lake where a commercial Flyboarding operation had sprung up.

Hunter was less than enthusiastic on his first try he says and his mom backs that up, but he slowly overcame his initial fears and started mastering
the skills needed to be an expert rider. He spent the summer teaching other people to fly and as he got better he began making his own videos of himself
in action. While he was learning to fly, Hunter had been focused on watching the videos of another Flyboard rider he really admired and wanted to emulate..
That rider was another local Texas teen who lived not too far away.

His name was Damone Rippy.

Rippy’s flyboarding videos were Hunter’s practice guide to improving and getting better. The two struck up a mutual friendship online, discussing the
ins and outs of how to perfect their flyboarding skills and tricks. Damone and Hunter were it seemed destined to meet at some point. Later that same
year they did. They both agreed, Hunter needed to come down to Austin, Texas on weekends after school and train and practice his flying with his new
friend at a place called AquaFly, a company that was helping find, encourage and train new Flyboard riders that they thought had potential in the sport.
Hunter’s mom was all for it, even the three-hour plus drive each way to and from her Austin area -home didn’t change her mind! Hunter and Rippy soon
became good friends and were pushing and pulling each other to greater heights as they trained and practiced together.


Rippy was already making a name for himself having traveled to the first World Cup Flyboarding contest in 2013 in Dohar, Qatar where he finished a
respectable fourth place. Hunter wouldn’t make his first competition appearance until 2014 in Dubai. He introduced himself to the world with an amazing
5th place finish.

These public competitions were one thing, but there was another more direct competition going on deep in the heart of Texas. It was a friendly and personal
one. Hunter was mentored by Damone, but he was starting to believe that he could one day beat his friend. He even told his friend Damone that he would
one day do so. That day would come in 2015. But before it did, Rippy would set the hydroflight world and the general public on fire with an appearance
on the hit NBC reality TV show “America’s Got Talent” Rippy showed what he could do on a Flyboard and it was impressive. Howard Stern, Heidi Klum and
the rest of the celebrity judges ate it up. They were so impressed they sent Damone all the way to the semi-finals of the show before he was finally
eliminated. Nonetheless, Rippy had instantly become the face of the new sport of hydroflight in America. His All-American good looks where splashed
everywhere and teen girls and others made him instantly aware of his new found celebrity via a social media explosion. But after all the ‘America’s
Got Talent’ hoopla died down Rippy went back to his training and doing a variety of shows and demonstrations in the U.S. and overseas.

A preview of things to come with these two friends and now competitive rivals was a contest in 2014 dubbed the North American Flyboard Championships. Rippy
defeated his friend finishing 1st, with Verlander coming in 3rd. But the gap between the two was closing fast. Then last year
in Dubai both Hunter and Damone would meet up in head-to-head competition and go one-on-one against each other. This time Hunter came out on top. Rippy
later sustained and injury, but still managed to finish 4th in the event. Hunter would pull off the first ever quadruple back flip in competition.
With the win Verlander laid claim to the title of “2015 World Cup Champion”

As for now in Texas football terms, you could say it’s only half- time and Rippy has a 14-7 lead overall (in head-to-head competitions) he’s won 2 out
of 3 times he’s competed against his friend Verlander. On the other hand, Hunter Verlander is now the reigning “World Cup Champion” and winning “Championships”
are what many sports fans believe sports are all about.

We’ll leave it for you to decide which one you believe! 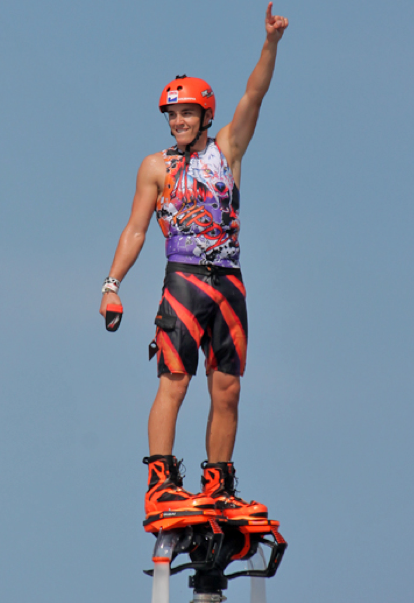 One thing is for certain, since 2015 both Damone Rippy and Hunter Verlander have continued to train and practice for the next competition and if the
past is any indication both of these Texas teens will be pulling out all the stops to win when they compete against each other and everyone else. In
the meantime, Verlander has switched to a new kind of jetboard called a ‘X-Jet-Jetblade’ but Rippy remains on the latest version of the ‘Zapta Racing-Flyboard’.

No matter what they’re flying on in competition these two high flying Texas teens will be putting their full talents on display this week at Hydro-Fest
2016!


We wish both of them the best of luck along with every other competitor.