Grant and Amanda flying in a Husband and Wife Congratulations to Grant Engler and Amanda Volf from Grand Rapids, Michigan who married today at the world’s
first jetpack wedding, hosted by adventure travel website Zozi.com and Jetlev Southwest. The theme for
the wedding? It was all about the Jetlev. The bride and the groom both made their entrance flying water-propelled jetpacks courtesy of Jetlev Southwest
and Zozi.com. Grant was dressed in an all-black wetsuit with a white bow-tie and Amanda was in all-white boardshorts and shirt, including the all-white
veil draped over the back of the jetpack. 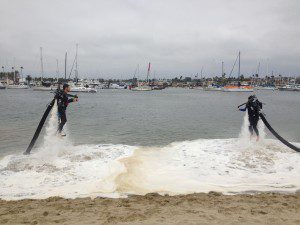 Flight training before the event[/caption] Both Grant and Amanda had never flown the Jetlev when they arrived in the morning, but they picked up the flying
skills in no time at all, even learning beach landings and take-offs, which were key to the jetpack wedding ceremony. With only three hours of total training,
they went from novice to experienced Jetlev pilots, proving just how accessible the Jetlev truly is! Grant flew out into Newport Harbor, then came down
the “aisle”, landing on the beach, where he awaited the entrance of his bride-to-be. Amanda then took to the air and flew down the aisle, landing next
to her father, who escorted her the last few steps to the alter on the sand, where the officiant went through their nuptuals. After they said their “I
do’s”, they had their first kiss on the beach, then both took off on the jetpacks and came down the aisle once again for the first time as man and wife,
led by the Jetlev Southwest team carrying a “Just Married” sign on the back of their jet ski. The mob of reporters interviewing the happy couple[/caption]
Noting the “world’s first” status of the event, the media came out in force. Channels 2, 4, 5, 7, and 11 from the local Los Angeles news market were on
hand, along with the LA Times and OC Register and the Associated Press. The couple put on a nearly-flawless performance, ignoring the pressure of the wedding,
the press and the fact that they were flying jetpacks! Congratulations to Grant and Amanda on starting their new adventurous life together! 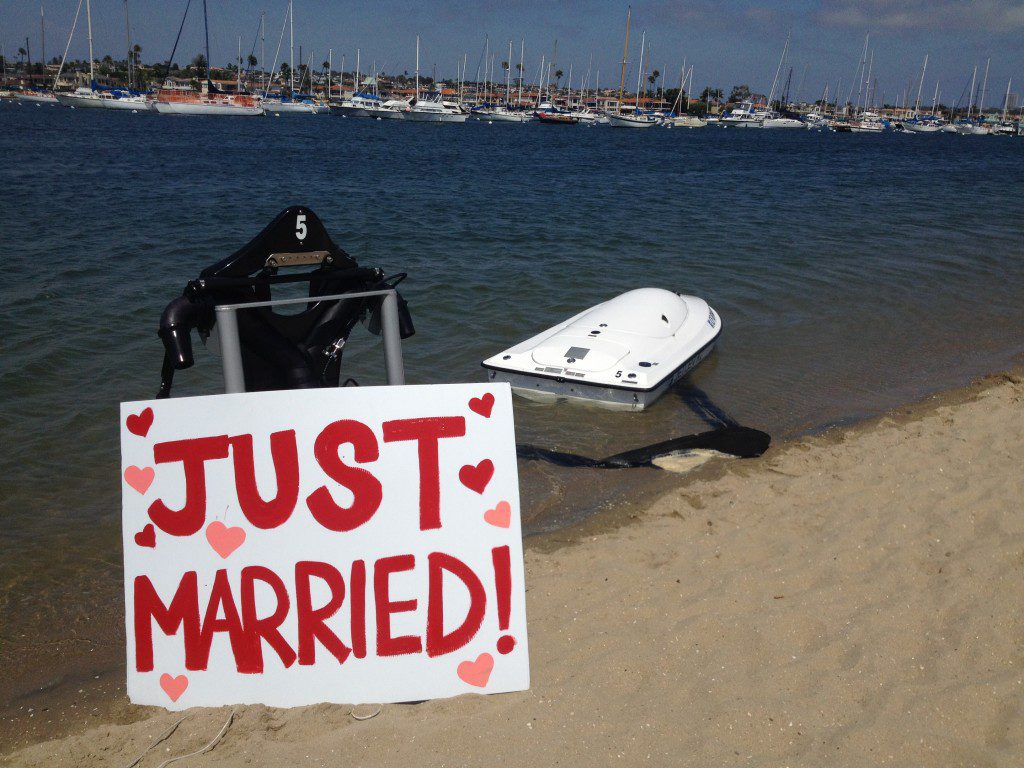 Congrats from Jetlev Southwest and Zozi.com